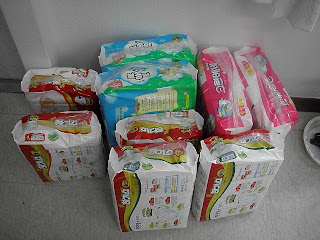 At first glance, this would seem a mundane, perhaps even somewhat peculiar photo--nothing particularly interesting other than an image of packages of diapers gathered on a floor of grey tiles.
But then, someone might tell you that these diapers were purchased for unwed mothers in Korea who have decided to raise their children.
And if you were someone like me, the photo might then become so much more than a photo.
It would become a story.
It would become so much more than a sense of mundane peculiarity.
It would begin to push at your eyes. It might lodge itself in your throat and open up your chest.
It would almost transform itself into a sharp edge to cut deeply into the most raw and vulnerable parts of who you are.
It would twist and writhe in your mind with unspeakable thoughts until it took on a voice of its own calling out all that you would rather forget but know you cannot and should not forget...
All the stories of those who must make a choice that no human should ever have to face...
Posted by Mila at 8:26 AM

With that said it certainly becomes more than just diapers...