flashback: my 19 year old adoptee self

Okay, brace yourselves. I've really dug out a few things from the archives...and they're simultaneously disturbing and cliche, and easily mistaken for melodramatic teen angst.
Despite the above disclaimer, and the rudimentary and novice nature of both the writing and the art, I assure you that the following pieces were born of more than the temporal and whimsical woes of adolescent rebellion.
I created the combination pieces of art and poetry in 1995 at the age of 19, although only one month away from my 20th birthday.
As mentioned, the writing and art are comparatively unsophisticated and reflect the young age at which they were written. But nonetheless, I think they are poignant and honest examples of the sometimes horrific inner struggle I faced as I dealt with the confusion and despair that have come to characterize, in part, my experience as an adoptee.
I often think of myself as a more extreme case. But maybe I'm not. Perhaps I simply have been limited in my encounters with other individuals who express thoughts and emotions similarly dark and dismal.
(Although there are certainly a few "kindred souls" who come to mind, whom I know will connect somewhat with this darker side...).
Furthermore, whether one is adopted neither precludes any single person from experiencing such emotion nor does it necessarily induce such emotion. It is simply to be human that gives any individual the potential capacity to experience such depth of emotion.
It is clear from the pictures and the accompanying writing that I was wrestling with very intense emotion--some intensely dark emotions. Regardless of their origin, the self-loathing, the confusion over my identity and place in the world are nothing more and nothing less that what is known as the human condition.
However, in my particular case, I now realize, of course, that so much of my struggle was directly connected to being adopted. But at the time, my family and I were clueless.
The darkness that poured out from me seemed inexplicable and without cause. None of us knew any better.
Now we do.
And although these pieces remain a bit shocking and unsettling to me even now, they also give me hope. I do not see myself in the same way that I did when I was 19, almost 20--well, that is, most of the time.
At least today, the confusion and emotion are not as self-abhorrent and self-destructive, and seem now to be directed in a healthier, more self-actualizing way.
It is not that I never enter into darkness again, but rather that the light is now allowed to come in. 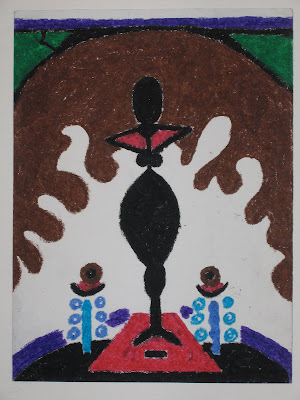 [oil pastel on paper, 9x12]
Skeleton
what an ugly sight
who would build such a thing as this?
all measurements out of proportion
especially there in the middle
unpleasant bulges
unbecoming shapes
beyond disgusting
what a shame
a shameful site
in that black tunnel
through that brown window
i see her strangling herself
for she broke the scale
and she is swimming in her 24-hour meal
just an addiction she cannot stop
just a coping skill
to kill
the emptiness
it is all or
nothing
she would prefer nothing
but
the art of self-control
the ritual of discipline
she cannot maintain
she wants to be a skeleton
so she can hide in her closet
undiscovered
never hungry again
never full again
but just a plain old skeleton,
with skin. 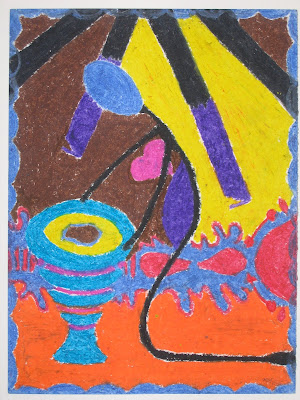 [oil pastel on paper, 9x12]
The Missing Stanza
judgement stares her in the eyes
condemnation orders her
on her face
on her knees
she doubts to grasp the offer
bloated head
bloated heart
bloated stomach
hazardous consumption
staring in the toilet,
her reflection
swims in defecation
urination
lacking explanation
perhaps a dance with that
fiery gentleman
until she is silver ashes
dancing on the breezes
winking in the winds
embrace his freedom?
taste his milk and honey?
then cease her staring
in the toilet
and her visions murdering
each other
in her bloated brain.
Posted by Mila at 1:59 PM

Labels: art, being an adoptee

I feel ya, sis. I think about my adolescent/early 20s self and shudder at times. Heck, I still have fairly unrestrained dark times quite frequently here in my mid-30s. I am glad, though, that I found the root of my angst, self-loathing and anger. So now it's just a matter of how to cope with it- doesn't make the feelings themselves any easier, but at least I now know what the cause is. -Jeremy

in her bloated brain."

I can feel the chaos in this poem. The despair is almost too much to bear.

I knew you would be able to relate, Jeremy. It's true that the knowing doesn't make it any easier, but it's also true that "knowing is half the battle," eh? And as you said, the other half of the battle is learning how to cope with the knowing...Thanks for sharing your thoughts.

The despair & chaos I felt at that time in my life was almost too much to bear. And the lack of knowledge regarding the issues inherent and natural to the adoptee experience only exacerbated the confusion and despair. That is in part why I am so grateful and relieved today to at least now know, as Jeremy expressed, the "why."

Thanks for stopping by and offering your thoughts.

This chills me and makes my heart goes out to you.

I'm really glad you're in another place now. That you've become more enlighten and learned in order to be able to move away from that level, at least, of self-loathing.
Knowing is good even if it often brings new frustration, confusion and tears.

Ehm..by "chills me" I mean it gives me chills, not cools me down. You probably got it anyway, and forgive me my incorrect use of my semi-native tongue ;)